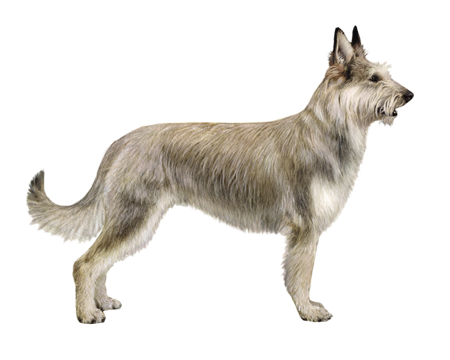 The Berger Picard is a good-natured, athletic dog that thrives on outdoor activities and affection. An excellent addition to active families, these dogs have captured hearts for generations.

The Berger Picard is believed to be one of the oldest herding dogs in the world, with origins dating back to the 9th century. The breed, which comes from the region of Picardy, France, has close ties to other French herding dogs like the Briard and Beauceron; it was not awarded its own breed designation until 1925.

Although French farmers loved the indigenous sheepdog, the Berger Picard almost became extinct during both World War I and World War II. Even though it has made somewhat of a comeback—and gained acclaim for its title role in the movie “Because of Winn Dixie”—the Berger Picard is still rare, even in its native France.

The Berger Picard is a solid, muscular breed with harmonious proportions and no signs of bulkiness. These are alert, confident dogs with tireless, efficient movements and observant, confident, spirited gaze.

The Berger Picard is a double-coated breed with a short, soft, dense undercoat and an outer coat that is harsh and crisp to the touch. The hairs on its outercoat are two to three inches all over their bodies and should have a slight wave but must never be flat, curly, woolly, soft, or so profuse that it hides the outline of their bodies. The Berger Picard is shown in its natural state; their coats must not be sculpted, shaped, or scissored.

Accents on the head and neck include moderate-length hair that contributes to rough eyebrows, moderate beard, and moustache, and a slight ruff on the front and sides of the neck—a distinct look known as griffonage—lend the breed its distinct appearance.

The Berger Picard comes in two colors: fawn and brindle. Fawn dogs may be clear or true fawn with no dark markings or fawn charbonné (fawn with dark charcoal trim on the outer edges of the ears and a gray underlay on their heads and bodies). Brindle dogs can be any shade of base color from black to light grey or fawn with stripes, of black, brown, red, grey, or fawn distributed throughout their coats.

Berger Picards are powerful dogs with strong, level backs; muscular shoulders and hindquarters; strong loins; and deep chests. Their tails are strong at the base and taper to the tip; at rest, the tail hangs straight and reaches to the point of the hock, ending in a slight “J” or crook without falling to the right or left.

These dogs have ears that are high-set, broad at the base and taper to a slightly rounded tip and medium-sized, oval-shaped eyes that are medium to dark brown and convey an alert, observant, confident expression.

Berger Picards are observant, good-natured, and even-tempered. Known as independent problem solvers with strong stubborn streaks, Berger Picards are also loving and devoted companions. The breed can be reserved with strangers but should not be timid or nervous.

True to their herding roots, Berger Picards require a great deal of exercise and are best suited to active families. These dogs also have a sensitive side and prefer to not be on their own for long periods of time. If left alone too long, Berger Picards can become bored and destructive.

Feed Berger Picards a high-quality dog food that is appropriate for their life stage (puppy, adult, senior) and consider a diet formulated for active breeds. Like all dogs, Berger Picards could become overweight if they are allowed to eat as much as they want. Portioning out their food with a measuring cup and limiting treats to no more than 10% of their daily calories can help keep these dogs fit and trim.

Berger Picards have waterproof double coats that do not require much grooming. Brush them at least once per week to remove dead hair and, during spring and fall when these dogs blow their coats, brush them with an undercoat rake several times per week to reduce shedding. Keep their ears clean and their nails trimmed.

Berger Picards are working dogs that require lots of exercise. These dogs love brisk walks, hiking, and swimming or games like fetch to help them burn off their abundant energy. Berger Picards also participate in dog sports such as competitive obedience, agility, tracking, flyball, rally, and herding. Mental stimulation is important, too. Provide Berger Picards with puzzle toys to help keep their minds engaged.

Berger Picards are both intelligent and stubborn, which means they can learn new things easily but may choose to ignore commands. Skip harsh reprimands and punishments, which can cause the sensitive breed to shut down. Appeal to their eager-to-please natures with positive reinforcement and rewards-based training. A training regimen that is consistent and fast-paced will appeal to the energetic working dogs and help channel their energy in positive directions.

Socialization is important, too. Introduce Berger Picards to new people, pets, and places to encourage their good-natured, observant personalities.