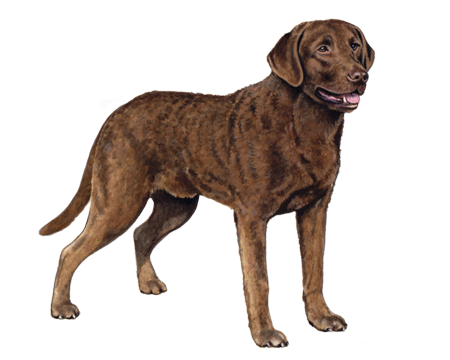 The Chesapeake Bay Retriever is an intelligent, cheerful breed. They are alert, energetic, and loyal—though they may be more independent-minded and aloof than other retrievers.

The Chesapeake Bay Retriever is among the few breeds that originated in the United States. Their unique story began when two Newfoundland dogs from England survived a shipwreck off the shore of Maryland.

Over time, these two dogs began to breed with the local retrieving and hunting dogs, including the Irish Water Spaniel, the Coonhound, the Flat-Coated Retriever, and the Curly-Coated Retriever. The resulting breed—with its wooly, waterproof coat—was well-suited for hunting in the Chesapeake Bay's near-freezing waters.

Tireless workers, dogs of this breed have retrieved up to 300 ducks from the bay in a single day. Given such impressive skill, the breed was eventually named the "Chesapeake Bay Retriever."

Known by fans simply as a "Chessie," it was one of the first nine breeds registered in America in 1878. And the AKC recognized the breed upon its founding in 1884.

Today, in addition to being skilled hunting and retrieving dogs, Chessies make fantastic family pets. Who would have thought one shipwreck could bring such great treasure?

Built to hunt in the harsh, cold weather and water of the Mid-Atlantic, Chesapeake Bay Retrievers have powerful bodies, thick double coats, and strong jaws capable of gently carrying ducks and other large game birds.

Chesapeake Bay Retrievers have short, thick coats with dense, wooly undercoats. Their coats contain natural oils that prevent water from reaching their skin and enable quick drying. In fact, their coats resist water just like the feathers of the ducks they retrieve do.

Chessies' coats come in a variety of brown, sedge, or deadgrass colors; this helps them blend into their surroundings. Tan is also possible. This breed sometimes has a small white blaze of color on the chest.

Chesapeake Bay Retrievers have broad, round skulls. Their distinctive eyes are medium-large, set wide apart, and very clear, with a yellowish or amber color.

Chessies have small ears that are set high on their heads and hang loosely. The tail of the Chesapeake Bay Retriever is medium length and medium-heavy at the base. It's straight or slightly curved.

Chesapeake Bay Retrievers have a calm nature that makes them a great family dog. However, they mature relatively late, at the age of three years. In their adolescence, they can have a stubborn character that eventually gives way to the more relaxed temperament for which they're known. Therefore, a confident owner would be best-suited to this spirited breed.

Chessies enjoys the attention of people and the company of other dogs, but they may chase other pets. They particularly love swimming and retrieving, and do well with active families that take them on outdoor adventures.

A calm nature coupled with athletic abilities and stamina not only make Chessies excellent hunting dogs but also allow them to excel in other jobs. They work as service dogs in law enforcement, performing bomb and drug detection, search and rescue, and disability assistance.

Chessies may be aloof or reserved with strangers. Careful socialization can help prevent or reduce fear-based defensive aggression.

Chesapeake Bay Retrievers are prone to being overweight. To keep their weight in a healthy range, their food intake—including treats— should be closely monitored. As a guideline, treats should make up no more than 10% of their calories each day.

To meet their nutritional needs, feed Chessies a high-quality food that's appropriate for their current life stage (e.g., puppy, adult, senior). Experts recommend a diet specially formulated for large-breed dogs. In particular, large-breed puppy diets keep Chessies from growing too fast and may decrease the incidence or severity of hip dysplasia as they age.

To keep their coats healthy and free of loose or dead hair, brush your Chesapeake Bay Retriever once a week, or more frequently during periods of heavy shedding. Because the natural oils in their coats provide needed protection from icy water, avoid bathing before cold-weather hunting trips.

A Chesapeake Bay Retriever's nails should get trimmed frequently; overly long nails can cause pain or discomfort.

Regular dental care is essential for their overall long-term health. In addition to professional dental cleanings, you should establish an at-home dental care routine. This may include regular teeth-brushing and dental treats or toys.

Chesapeake Bay Retrievers have tons of energy and stamina, so they need plenty of daily exercise to keep them happy and calm. Long walks and hikes are great ways for them to burn off energy. They also enjoy dog sports such as tracking, hunting, field trials, agility, pulling sleds or carts, and obedience.

But most of all, they love retrieving and swimming. Retrieving items such as tennis balls and floating toys provides great exercise and takes advantage of their natural swimming ability.

Chessies respond well to reward-based training. This can be helpful when redirecting their natural tendency to retrieve from inappropriate items (e.g., shoes or a child's favorite stuffed animal) to preferred items (e.g., tennis balls and dog toys).

Also, early socialization can help your dog develop into a well-mannered adult.

Knowing if your Chesapeake Bay Retriever is a carrier or at-risk for these conditions can help you and your veterinarian plan for your pup’s lifelong care. With Wisdom Panel™ Premium, you can get results for over 200 genetic health tests.