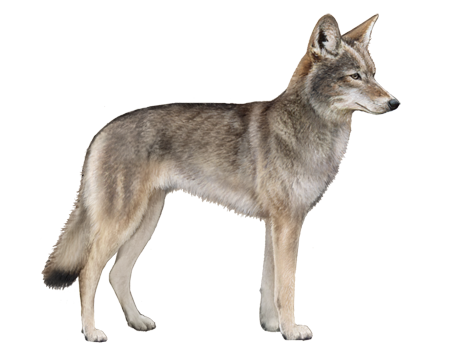 The Coyote—also known as the prairie or brush wolf—is closely related to dogs and has a dog-like appearance. Despite this similarity, Coyotes are still wild animals and should not be brought home or kept as pets. Though some people do have licenses to specifically house Coyotes, it’s best to remember that they are not domesticated and while rare, Coyotes have been known to attack.

The Coyote’s name is derived from the Aztec ‘coyotl,’ which dates back at least a thousand years. As Anglo-Americans started arriving in the Southwest from 1820-1840, they encountered an animal that the native people referred to as coyote.

Coyotes and humans have always had a storied past—in part due to the Coyote’s intelligence and predatory nature with human domestic or game animals—and it hasn’t always been one that ended well for the Coyote. In fact, between 1947 and 1956, approximately 6.5 million coyotes were exterminated in the western United States through federal management programs.

The Coyote’s range now reaches across Canada and the United States, even within urban settings. Because of their adaptability, Coyote populations in North America are stronger than they’ve ever been.

The exact size of a Coyote varies depending on where exactly it lives and what time of year it is.

When prey is hard to find, for example, these animals primarily become vegetarian, which makes them much less muscular than they tend to be when they are hunting for meat. As with their size, Coyotes’ coats may look different depending on their habitat.

Coyotes have long, coarse fur that is traditionally reddish on the legs and a mix of gray and red elsewhere, with a bushy, black-tipped tail.

There is not much that’s distinct about a Coyote’s appearance. In fact, in the wild, it can be difficult to discern a Coyote from a medium or large dog from a distance. These animals vary greatly in color or size depending on where in the world they live.

The Coyote is an intelligent, cunning and adaptable animal. They are incredibly fast and efficient hunters, and they are mostly nocturnal, doing the majority of their hunting in the dark at night.

The Coyote has plenty of competition when it comes to food sources—including lynx and bobcats—and larger animals, like wolves, do sometimes prey on coyotes themselves.

Coyotes are incredibly territorial and can live 13 to 15 years in captivity. In the wild, however, these animals tend to live between six and eight years.

The Coyote is primarily nocturnal, and their nightly yaps and yowls can be heard by those close enough when they find prey.

They are efficient, intelligent hunters with keen senses, and while they tend to be afraid of humans, there have been stories of meetings gone wrong. They are also very territorial.

As omnivores, Coyotes primarily hunt in packs with swift hunting abilities who can take down their prey quickly. When it’s harder to find prey, especially during winter months, they can live on berries and fruit.

Coyotes have coarse, long hair, but their overall size and appearance varies based on where they live and the time of year.

Coyotes are intelligent and swift, sometimes capable of speeds up to 40 mph.

Their adaptability and speed has been their greatest attribute, bringing them back from near extinction to their strongest population numbers in North America.

Coyotes are wild animals that should not be brought home for domestication. Although they tend to be fearful of humans, there have been reported incidences of Coyotes attacking humans.