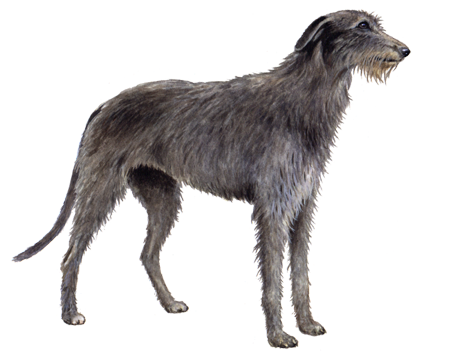 One of the tallest dog breeds, the Scottish Deerhound is also known as the “Royal Dog of Scotland.” Bred to hunt the giant wild red deer of Europe, the breed is as majestic as it is ancient.

These large dogs were identified as Deerhounds as early as the 16th century. As the name states, they excel at deer hunting, either coursing (chasing until their prey drops from exhaustion) or stalking (going after the deer once it has been wounded).

Scottish Deerhounds have always been associated with aristocracy, to the point where, in the Age of Chivalry, only Earls and above could own a Deerhound. This exclusivity actually hurt the breed, as it meant its breeding was closely restricted.

As the red deer began to disappear from England and Southern Scotland in the 18th century, the Deerhound was replaced with its smaller relative, the Greyhound. Luckily, there was still an active wild deer population in the Northern Highlands of Scotland, which became the last stronghold for the Scottish Deerhound. When the Highland chieftains claimed ownership of the breed, however, they applied the same exclusive restrictions on ownership. This resulted in the Deerhound again declining significantly until about 1825.

At that point the lineage was saved by breeders Archibald and Duncan McNeill, who were able to restore the Deerhound back to its former state. To this day it is still a rare and highly sought-after breed, known for its sense of smell, speed, and stamina. Hundreds of years of protecting and hunting for its masters has given the Scottish Deerhound a powerful desire for human companionship, and makes for an extremely loyal dog.

A tall, majestic beast with a tapered head and long neck, this breed has a wiry coat in several colors.

The Scottish Deerhound comes in many colors, with competitive breeders preferring the dark blue-grey. Other colors can include various shades of dark grey, grey, yellow, sandy red, or red fawn.

One of the tallest dog breeds, this is a strong, fast, and agile sighthound. The Scottish Deerhound looks like a large Greyhound, which is a close relative. They both have a lithe, athletic build that gives off a powerful and very regal appearance.

As their background suggests, Deerhounds have a very regal manner. You could almost consider them polite, but certainly with unique personalities. They are gentle and crave human companionship, though they can have their little quirks. In general, they do not tolerate being crated while their owner is at work.

These dogs are gentle, and can often be found lounging around the house, but they have large bursts of energy when exercising.

Scottish Deerhounds require a high-quality dog food that is age-appropriate—whether it’s commercially manufactured or homemade (with a veterinarian’s supervision and approval). It’s important to monitor the amount of food you give your Scottish Deerhound. Reduce the portions or restrict calories if your pup gains weight.

Your veterinarian is always a good source to help provide you with appropriate nutrition and feeding guidelines.

The Scottish Deerhound has a wiry, harsh coat that is easy to care for, and weekly brushing should be all that’s needed.

This regal breed needs plenty of exercise to stay healthy and happy. Scottish Deerhounds require space to roam and exercise freely, and will appreciate long walks or jogs. The breed does tend to get lazier as they get older—as most dogs do—and you may need to pull them off of the couch. Even so, regular exercise is still very important in their older years.

They will also develop into healthier adults if they have a playmate to grow up with as a puppy.

This is a sensitive and gentle breed that prefers positive training methods. The Scottish Deerhound responds to kind human companionship that will help it flourish into a healthy and happy adult dog. They are easily stressed, and should not be kenneled or crated at home during the day.

Knowing if your Scottish Deerhound is a carrier or at-risk for these conditions can help you and your veterinarian plan for your pup’s lifelong care. With Wisdom Panel™ Premium, you can get results for over 200 genetic health tests.