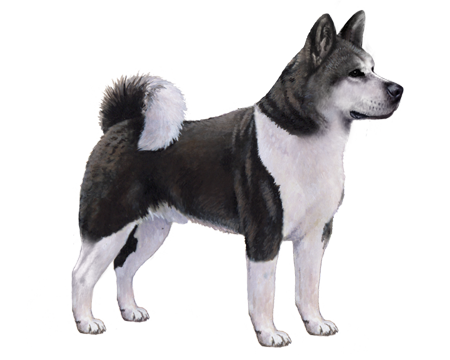 The Akita is a strong, confident, profoundly loyal breed. These burly, double-coated dogs frequently serve as hunting dogs and guard dogs. Part of the working dog group, these quiet, often aloof pups, are affectionate with their owners. They thrive on human companionship—as long as those humans are part of their "pack."

The Akita, once known as Odate Inu, is a breed associated with myth and legend in Japan.

Akitas originated in the Akita prefecture in northern Japan in the 1600s. It's said that an exiled nobleman there asked locals to breed a large hunting dog with a strong work ethic and the ability to take down big game—such as bears, wild boars, and deer. Before given an official breed name, these dogs were simply called "snow country dogs" because they came from the snowy, mountainous regions of Japan.

Hachiko is perhaps one of the most well-known Akitas. In the 1920s, the loyal companion accompanied his owner to the train station each morning and returned to meet his train each afternoon. According to legend, Hachiko returned to the station for nine years after his owner died, greeting the train each afternoon. Inspired by Hachiko's story, Helen Keller reportedly brought the first Akita to the United States in 1937.

The Akita approached extinction multiple times during its long history. Fortunately, a national breed club was established in Japan to ensure its survival in 1927. The Akita was named the national dog of Japan in 1931. And the working breed remains popular in Japan and around the world today.

The dense coats of Akitas can be solid black, brown brindle, fawn, red, or white. They may also have brown/black, red/black, silver/black, or fawn/black overlay coloring. Akitas may have face masks, as well.

The Akita's ears—small in comparison to their heads—stand stiffly upright. In addition to feet designed for walking in the snow, Akitas have strong front dewclaws to help them climb out of frigid waters.

Akitas can also be aggressive toward other dogs—and dogs of the same sex, in particular. So, they often aren't the best breed to take to the dog park or doggie daycare. In fact, Akitas do best as the only dog in a home. Owners should supervise interactions with other dogs cautiously.

Akitas need a high-quality dog food that's appropriate for their life stage (e.g., puppy, adult, senior). They'll also benefit from a diet formulated for large-breed dogs. Measuring their portions and monitoring their food intake can help keep Akitas from becoming overweight. Keep in mind that the strong guarding tendencies of Akitas may extend to their food. So, they should be fed alone—away from other animals and children.

Double coats allow Akitas to withstand harsh temperatures. But they also require above-average grooming. Though the breed is low-shedding and Akitas groom themselves (as cats do), you should brush them at least once per week to remove loose fur. These dogs also blow their dense undercoats twice a year during seasonal shedding. So, get the vacuum cleaner ready.

As with all dogs, Akitas require regular dental care, including at-home teeth brushing and professional dental cleanings. Maintaining good dental hygiene is vital for their overall long-term health, and the sooner you get them into a good dental care routine, the better.

Despite their strength and size, Akitas are well-suited to living in smaller spaces, such as apartments, because they aren't a highly active breed. A daily walk around the block is enough to wear out this working dog. But their strength and working dog tendencies make them ideally suited to sports such as carting, sledding, agility, and tracking.

Akitas may be described as stubborn, independent, and willful. But they're also eager to please. For this reason, house-training an Akita tends to be a snap.

Starting a consistent training program when your Akita is a puppy is the key to ensuring they're responsive and well-trained into adulthood. And socialization will help your Akita better accept strangers.

Because of their strong prey drive, Akitas do best as the only pet in a home. And unless you want to see your Akita show their rebellious side, you should not let them off-leash in areas without secure fencing.