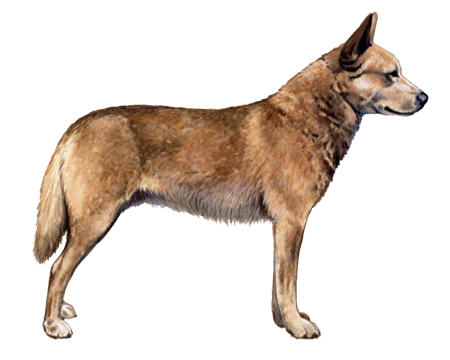 Australian Cattle Dogs hail from—you guessed it—Australia. Crossing a native Dingo with an imported Scottish smooth-coated Collie led to the creation of the breed around 1840. The dogs, also known as Blue Heelers or Queensland Heelers, were well suited to working in high temperatures and rough terrain, and helped herd cattle across rugged landscapes and long distances in the Outback. Farmers clamored for the vigilant, hardworking dogs that fast became the quintessential herding breed across Australia.

Over time, breeders crossed the earliest Australian Cattle Dogs with breeds like the Dalmatian and Black and Tan Kelpie to add traits such as ease with horses, faithfulness, and protective instincts. Their willingness to work (and skill in their roles) have earned Australian Cattle Dogs reputations as top herding dogs. The breed became charter members of the American Kennel Club’s herding group in 1983.

Australian Cattle Dogs are double-coated with short, dense undercoats and rain-resistant outercoats with straight, hard hairs that lie flat. The coat is longer under their bodies and behind their legs, forming a mild breeching at the thighs. Their coats are also longer and thicker around their necks.

The breed comes in two colors: blue and red speckle. Australian Cattle Dogs with blue coloring should be blue, blue mottled, or blue speckled with or without other markings. The breed standard allows evenly distributed black, blue, or tan markings on the head; tan on the forelegs, breast, throat, jaws, inside of the hindlegs, inside of the thigh from the front of the stifles to the outside of the hindlegs from hocks to toes.

Australian Cattle Dogs with red speckled coloring should have an even red speckle all over their bodies, including the undercoat, with or without dark red markings on their heads.

Feed Australian Cattle Dogs a high-quality dog food that is appropriate for their life stage (e.g., puppy, adult, senior) and consider a diet formulated for active breeds. Australian Cattle Dogs that are used as working dogs may need extra nutrients to meet their needs. Talk to a veterinarian about the best options.

Though these highly active dogs are not known for being overweight, it is still a good idea to portion out their food with a measuring cup and limit treats to no more than 10% of their daily calories to avoid overfeeding.

Australian Cattle Dogs have naturally weatherproof coats with no odors or oily residues so a quick brushing and occasional bath are all it takes to keep them looking good. During semi-annual shedding seasons, daily brushing will help remove cast-off undercoat and minimize shedding (and vacuuming). Keep their nails trimmed, too.

Like all breeds, Australian Cattle Dogs benefit from regular dental care. Start a routine that includes at-home teeth-brushing and professional cleanings to ensure good oral hygiene throughout their lives.

This is a breed that wants to go, go, go. If given a job to do, Australian Cattle Dogs will happily work from sunrise to sunset. As pets, the breed needs a lot of exercise to be a happy and healthy companion. Long walks (or runs), trips to the dog park, swimming, hiking, or other activities that let Australian Cattle Dogs show off their stamina and endurance are ideal. It is an intelligent breed that excels in herding, agility, rally, competitive obedience, and other dog sports.

Australian Cattle Dogs treat training like a job. They are intelligent and can quickly master commands and learn new tricks. Keeping training activities short and fun—but not repetitive—can help hold their attention and prevent these dogs from becoming bored and destructive. A commitment to consistent training that emphasizes positive reinforcement and rewards is best for this breed.

Knowing if your Australian Cattle Dog is a carrier or at-risk for these conditions can help you and your veterinarian plan for your pup’s lifelong care. With Wisdom Panel™ Premium, you can get results for over 200 genetic health tests.