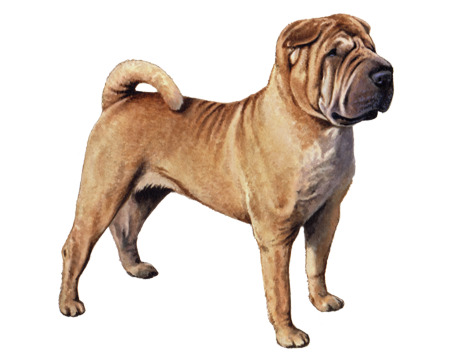 The Chinese Shar-Pei is a unique-looking dog with a wrinkled face, tiny ears, and a blue-black tongue. These dogs are often suspicious of strangers and excel at guarding. An ancient breed, the Chinese Shar-Pei has also been used in farming and hunting for centuries.

A breed as old as the Chinese Shar-Pei is bound to have a few wrinkles. Experts think this majestic dog dates back to the Han Dynasty in China. It's been depicted in artwork from 200 B.C. And references to "wrinkled dogs" appear in ancient Chinese manuscripts.

In rural China, the working class prized the Chinese Shar-Pei as an excellent farming and hunting dog. These muscular, do-it-all canines hunted wild boars, herded livestock, and guarded against predators. And if that weren't enough, the Chinese Shar-Pei's blue-black tongues even warded off evil spirits (according to folklore).

Despite their popularity, the breed once faced extinction. When China's nascent communist government disapproved of dogs and imposed a tax on them, many Chinese Shar-Peis were eliminated. But a few of the breed remained in rural areas and outlying countries such as Hong Kong and Taiwan.

In 1973, a Hong Kong breeder named Matgo Law launched a concerted effort to save the breed. Increased media focus skyrocketed interest in Chinese Shar-Peis—catapulting these wrinkle-faced pups from "the world's rarest dog" to one of the world's most popular breeds. Today, it's one of the most ancient breeds recognized by the American Kennel Club.

The Chinese Shar-Pei is a medium-sized dog with a square profile, oversized head, petite, triangle-shaped ears, and small, sunken eyes. Their flat, wrinkled muzzle has been compared to that of a hippopotamus.

The word "shar-pei" means "sand skin"—a reference to the breed's coarse, sandpaper-like coat. A soft coat is actually considered a major flaw in the breed by American Kennel Club standards.

The Chinese Shar-Pei has two coat lengths: A "horse coat" is extremely short, whereas a "brush coat" is longer but still shorter than one inch at the withers. This breed's fur can be one of several solid colors—including apricot, black, black sable, blue, brown, cream, fawn, and red. Darker shading down the back and on the ears is considered acceptable in show.

Bountiful folds of loose skin on the head, neck, and withers are the breed's most distinguishing features. Chinese Shar-Pei puppies have wrinkles covering their entire bodies.

This breed also has a blue-black tongue, muzzle, gums, and mouth. Only one other breed shares this distinct feature: the Chow Chow.

Aloof and reserved, the Chinese Shar-Pei can become territorial and reactive without adequate training and socialization.

These alert, intelligent watchdogs develop strong attachments to their owners. And though they generally tolerate children, they aren't known for being overly affectionate or enjoying rough play.

Fiercely loyal to their people, Chinese Shar-Peis are generally not welcoming to strangers, other dogs, or smaller animals. And they may respond with aggression if they feel threatened. As such, Shar-Peis don't always make great family pets.

You should feed your Chinese Shar-Pei a high-quality dog food that is appropriate for their life stage (e.g., puppy, adult, senior). To prevent obesity, monitor how much your dog eats, and reduce portions and treats if necessary. As a general rule, treats should make up no more than 10% of a dog's calories.

It doesn't take much grooming to keep Chinese Shar-Peis looking good. But the folds in their skin can harbor infection and need to be wiped out with a damp cloth regularly. In addition, the breed requires occasional baths and routine nail trims.

The Chinese Shar-Pei's short ears are prone to infection. But frequent ear cleaning can help prevent problems. Skip the cotton swabs and hydrogen peroxide and use an ear-cleaning solution to flush debris from the ear canal.

Chinese Shar-Peis, like all dogs, also require regular dental care. It's best to start an at-home dental hygiene routine (that includes regular teeth brushing and professional dental cleanings) when your dog is young.

An adaptable breed, the Chinese Shar-Pei is just as content tagging along for a long walk as it is lounging on the sofa. Known for their calm and alert demeanor, most Shar-Peis require minimal exercise and rarely bark—making them excellent apartment dogs. However, the breed does overheat easily and should avoid high-intensity exercise.

Skipping out on training can result in serious problems with the Chinese Shar-Pei—an independent, strong-willed breed. Because these dogs tend to rebel against harsh punishment, you should use consistent, positive training methods, praise, and treats.

Training and early socialization, including puppy-training classes, can help a Chinese Shar-Pei become a well-mannered companion.

Knowing if your Chinese Shar-Pei is a carrier or at-risk for these conditions can help you and your veterinarian plan for your pup’s lifelong care. With Wisdom Panel™ Premium, you can get results for over 200 genetic health tests.