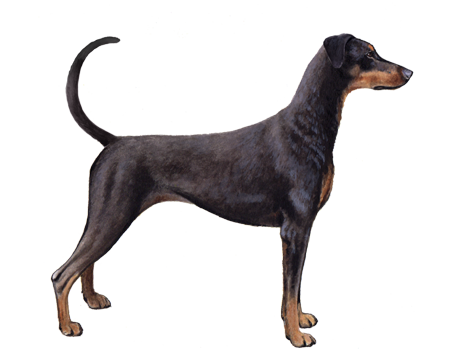 The Doberman Pinscher is a fearless, vigilant, intelligent breed that loves to please. Dobermans are good-natured and affectionate, protective of their people and territory, and widely used for guide work and therapy. They’re lovely, loyal household companions.

In 19th-century Germany, Frederick Louis Dobermann was a tax collector and the local dog catcher. And he wanted a sturdy breed that would help him with his work.

As the area dog catcher, Dobermann had access to dogs of many different breeds—some of which do not exist today. As he began developing what would become the Doberman Pinscher, he sought to create a breed with the color, shape, and strength of the Rottweiler and Great Dane, the agility and determination of the German Pinscher, the speed of the Greyhound, the tenacity of various Terriers, and the sleek coat and figure of the Manchester Terrier. He also added Schnauzers, German Shepherds, German Shorthaired Pointers, and Weimaraners to the mix.

This new breed came to the United States in the early 20th century, and the Doberman Pinscher Club of America was founded shortly after. Today, the club has more than 2,000 members and 58 chapters located throughout the United States.

A muscular and noble-looking dog, the Doberman Pinscher has an impressive, compact physique.

The Doberman’s short, sleek coat can be black, blue, red, or fawn, and may have rust markings.

Doberman Pinschers have an impressive stature, sporting a triangular head atop an arched neck with sharp, straight ears. The breed’s lips fit tightly to the muzzle, and oval-shaped eyes give the dog a serious and determined look.

The Doberman maintains a bold, square posture and holds the tail in a reserved position.

Doberman Pinschers are generally playful and gentle with children. But they tend to be reserved with strangers and unfriendly toward strange dogs. Socialization can help reduce these tendencies.

This breed is fiercely loyal to family—without being overly protective or aggressive. That being said, the Doberman is a confident dog that will defend its home and people if needed. Though commonly thought to be an intimidating breed, Doberman Pinschers are a stable, friendly, and loyal companion.

Doberman Pinschers need a high-quality diet that’s formulated for their age. Take care with how much food you give your Doberman, and reduce portions if your pup gains weight. Also, remember that giving too many treats can contribute to obesity.

Routine grooming will keep your Doberman Pinscher looking their finest. To maintain their coat’s healthy shine, use a short-bristled brush or grooming mitt. The Doberman Pinscher’s nails should be trimmed monthly, and teeth brushed regularly. Your veterinarian may also advise wiping out your dog’s ears every few days to keep them clean.

Doberman Pinschers are energetic, strong, and have great stamina. As such, they excel in several activities.

They typically enjoy canine sports such as agility, tracking, flyball, musical freestyle, frisbee, and obedience. For both physical and mental health, Dobermans need a large, fenced-in area in which to run.

Enjoying mental challenges, the Doberman Pinscher responds well to reward-based training using treats or favorite toys. But be aware that they have great strength and can become forceful, destructive, and unmanageable if not raised properly.

Knowing if your Doberman Pinscher is a carrier or at-risk for these conditions can help you and your veterinarian plan for your pup’s lifelong care. With Wisdom Panel™ Premium, you can get results for over 200 genetic health tests.