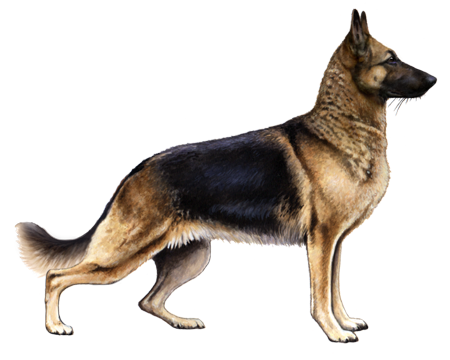 The modern-day German Shepherd breed is a cross between the long-haired, short-haired, and wire-haired shepherd dogs of the German regions of Württemberg, Thuringia, and Bavaria.

Initially bred for herding, they became popular for many other jobs because of their strength, intelligence, and excellent temperament.

Max Emil Von Stephanitz sought to protect and refine the German Shepherd breed at the end of the 19th century. German Shepherds were used as German police and military dogs during World Wars I and II. They were also very good at locating wounded soldiers, and Allied soldiers took notice. Some soldiers introduced the breed to their home countries, and the popularity of the German Shepherd took off around the world.

The German Shepherd was recognized by the American Kennel Club in 1908. From 1925-1936, it was the most popular dog breed in the U.S. Though it eventually lost this title, it remains one of the most well-known and popular breeds.

Today, German Shepherds are just as likely to be loving, protective family dogs as they are working military or police dogs.

German Shepherds are balanced and muscular dogs. They appear poised, confident, and always ready to work. This breed has a large, deep-chested, slightly elongated body with smooth curves (rather than an angular outline), and a firm overall structure.

The German Shepherd's coat comes in two varieties: the double coat and the long and harsh outer coat. Both varieties have an undercoat. The double coat is dense and close-fitting. It is typically short on the head and front legs, and longer on the neck and hind legs.

The long and harsh outer coat is long and soft, with tufts on the ears and legs. This creates a bushy tail and "trousers." Longer hair on the neck almost gives the appearance of a mane.

German Shepherds are generally a combination of black and tan, though more or less black may be seen. There is also a gray variant, where the tip of the hair is black, and the rest is tan. A black mask and saddle are common traits in this breed.

Though not recognized by the AKC, all-white German Shepherd Dogs do exist under a separate breed name. And diluted color variants can occur in the German Shepherd, but they are considered faults under AKC's standards.

The German Shepherd has erect, medium-size ears that are carried upright. Their eyes are almond-shaped, medium in size, and very dark in color. This breed has a strong upper and lower jaw and a scissor bite—where the incisors of the upper jaw overlap those of the lower jaw.

German Shepherds are a great breed for families due to their devoted, loving, and affectionate personalities. They enjoy receiving lots of attention and companionship from their people, and love being included in family activities.

German Shepherds are generally friendly towards children as long as they're not treated harshly. At times, they can become over-protective and unsure of or standoffish with strangers. Socializing them early can help them be more accepting of new people.

Intelligence and alertness are common personality traits of German Shepherds. And these are the behavioral strengths that allow them to excel as service dogs for law enforcement, search and rescue, and disability assistance dogs. However, their personalities can vary. Some German Shepherds may be calm and watchful, whereas others might be more energetic.

German Shepherds need a high-quality food appropriate for their life stage (e.g., puppy, adult, senior). They also benefit from diets that are formulated for large-breed dogs, particularly when they are puppies. Feeding a large-breed growth diet when they are young prevents them from growing too fast, which may decrease the likelihood or severity of hip dysplasia as they age.

German Shepherds should be brushed every few days to keep their coat clean and free of loose hair. During periods of seasonal shedding—which typically occur once or twice a year—you will likely need to brush more frequently to keep the abundance of hair from overtaking your home.

Trimming nails, cleaning ears, and brushing teeth should also be part of every dog's grooming routine, regardless of breed.

German Shepherds are active dogs that like to keep busy and have jobs to do. That means they need frequent mental and physical exercise to stay happy. This can include daily walks, runs, play sessions, and puzzle toys.

They also enjoy participating in dog sports such as agility, tracking, flyball, and competitive obedience. These activities are not only good for their bodies but keep their minds sharp as well.

Like any dog, if German Shepherds don't get an adequate amount of exercise they could become pent-up and frustrated. And that could lead to undesirable behaviors, such as destructive chewing.

German Shepherds are eager to learn, and they respond well to reward-based training and instructions given in a firm and calm tone.

Ongoing training is recommended, as it will reinforce obedience concepts and strengthen their bonding with their family. Dedicated training will also temper the German Shepherd's guarding tendency.

Knowing if your German Shepherd Dog is a carrier or at-risk for these conditions can help you and your veterinarian plan for your pup’s lifelong care. With Wisdom Panel™ Premium, you can get results for over 200 genetic health tests.