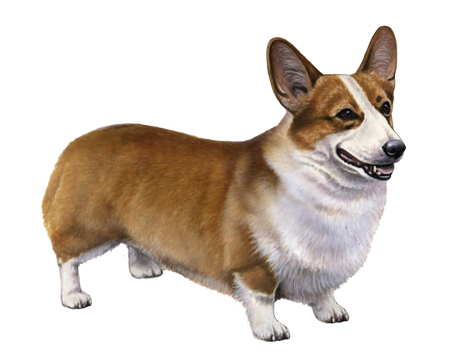 Pembroke Welsh Corgis are strong, athletic working dogs. Though small in stature, the breed tackles the big task of herding cattle. Their skill has made them one of the world's most popular herding breeds.

Pembroke Welsh Corgis are tenacious little herding dogs whose origins date back to 1107 A.D. Though named for Pembrokeshire, Wales—where the breed originated—their earliest ancestors were from the same spitz-type family as the Keeshond, Pomeranian, Finnish Spitz, and Norwegian Elkhound. Flemish weavers who emigrated to Wales brought their herding dogs that served as the foundation for this short-legged herding breed.

Queen Elizabeth II helped to popularize the breed. Her Majesty got her first Pembroke Welsh Corgi in 1933 and has been a devoted Pembroke owner ever since.

The Pembroke Welsh Corgi is a low set, strong, active dog that moves with a smooth, free gait and intelligent expression.

This double-coated breed has a short, thick, weather-resistant undercoat and a longer, coarse outer coat that lies flat. While the overall length of their coats varies, Pembroke Welsh Corgis have longer hair around their necks, chests, and shoulders (creating a ruff) and on the back of their forelegs and underparts.

"Fluffies" have coats that are extreme in length with exaggerated feathering on the ears, chest, legs, feet, underparts, and hindquarters. Though adorable, this is considered a serious fault according to the breed standard.

Pembroke Welsh Corgis come in several colors, including red, sable, fawn, black, and tan with or without white markings. The breed standard allows for white markings on the legs, chest, neck, muzzle, underparts, and as a narrow blaze on the head. "Whitelies," a white coloring with red or dark markings, and "Bluies," portions of the coat with distinct bluish or smoky casts, are considered serious faults.

Pembroke Welsh Corgis are low-set dogs that are much longer than tall. These dogs have firm and level toplines; deep chests; short forearms; and strong, flexible hindquarters. Pembroke Welsh Corgis have firm, erect ears that taper to a slightly rounded point, and oval, medium-sized eyes that convey an intelligent, interested expression.

Pembroke Welsh Corgis also have a reputation as good watchdogs. These small dogs have a big bark and will alert their owners to strangers or unfamiliar sounds.

Feed Pembroke Welsh Corgis a high-quality dog food that is appropriate for their life stage (e.g., puppy, adult, senior). This breed may easily become overweight. In addition to other health concerns, weight strains their long backs, potentially leading to disc problems. To avoid overfeeding, portion out their food with a measuring cup and limit treats to no more than 10% of their daily calories.

Pembroke Welsh Corgis have waterproof double coats that require regular grooming. Brush them at least once per week to remove loose hair and prevent shedding. During seasonal shedding periods in the spring and summer, regular baths and daily brushing with an undercoat rake will help loosen excess hair. Keep their ears clean, and their nails trimmed.

These small dogs have big exercise needs. Pembroke Welsh Corgis are working dogs that are happiest with a job to do. If they are not herding cattle or sheep, this high-energy breed enjoys long walks, hikes, and trips to the dog park. Due to their short legs and bulky bodies, Pembroke Welsh Corgis are not great swimmers and cannot keep up on a bicycle ride. Their long bodies put them at risk of back injuries, so it's important to avoid activities that require a lot of jumping or stairs. They don't appreciate extreme temperatures and should not spend too much time outdoors in extreme heat or cold.

These highly intelligent dogs also excel at agility, obedience, rally, tracking, and herding. Mental stimulation is important, too. Puzzle toys and other games are helpful ways to keep their minds engaged.

Pembroke Welsh Corgis are intelligent but have a stubborn streak. Consistent training that focuses on positive reinforcement and rewards will help them master basic commands and learn new tasks. These are sensitive dogs, so avoid harsh training methods. Pembroke Welsh Corgis love spending time with their owners and will see training as a bonding experience.

Socialization is essential for this breed. Starting when they are puppies, introduce them to activities that allow them to engage with others. Even if it's interacting with the neighbors on a walk around the block, it will help nurture their need to engage with a wide range of people, pets, and places. Provide regular socialization throughout their lifetimes.

Knowing if your Pembroke Welsh Corgi is a carrier or at-risk for these conditions can help you and your veterinarian plan for your pup’s lifelong care. With Wisdom Panel™ Premium, you can get results for over 200 genetic health tests.