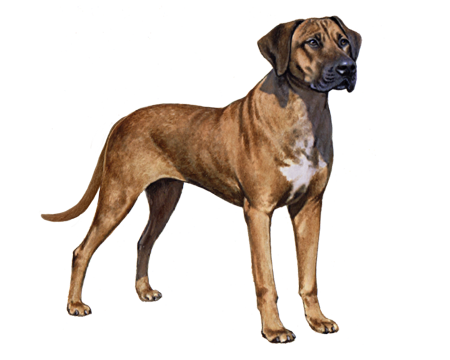 The Rhodesian Ridgeback is a beautiful, powerful hound. These dogs are affectionate and even-tempered with their owners. But they can also be strong-willed and independent—with a strong instinct to hunt. When trained and socialized, Rhodesian Ridgebacks make excellent companion pets.

The Rhodesian Ridgeback originated in southern Africa as a cross between the native ridged Khoikhoi dog, Greyhounds, and various terriers. The resulting breed could traverse rugged terrain while hunting and endure harmful insects in the area, such as the tsetse fly.

In the 19th century, the hunter Cornelius van Rooyen from Rhodesia bred Greyhound-like ridged females into his original pack of dogs. And the offspring had a particularly helpful talent: They would find and confront lions, but not kill them. This behavior gave the hunter time to prepare and fire his rifle.

When they weren't hunting, these dogs protected riders from dangerous leopards and baboons. And they would track other game, such as antelope, for their people to eat.

The Rhodesian Ridgeback is a strong, muscular hound with an athletic appearance. The breed has a unique back "ridge" formed by a strip of hair growing opposite of the rest of the coat.

The Rhodesian Ridgeback is named for the characteristic "ridge" along its back. According to the breed standard, this feature should start immediately behind the dog's shoulders and taper as it reaches the hips. It should also contain two identical crowns (or whorls) directly opposite each other—one at each end of the ridge.

Originally bred as lion hunters in South African, modern-day Rhodesian Ridgebacks retain their ancestral sense of courage and dedication. As such, the breed makes a wonderful (if somewhat sensitive) companion.

Because Rhodesian Ridgebacks are still true to their roots, they can also be protective and territorial. So, early socialization and training are critical.

Rhodesian Ridgebacks thrive on an age-appropriate, high-quality diet. And they can be scavengers. So, be sure to never leave your food unattended.

Some dogs are prone to gaining excess weight as they age. Monitoring how much your Rhodesian Ridgeback eats and reducing their portions, if necessary, is an easy way to prevent this. Your veterinarian can also advise on appropriate nutrition and feeding guidelines.

This breed doesn't need much in terms of grooming. Brushing once a week can help clean out loose hair and keep your Rhodesian Ridgeback's coat shiny and healthy. An occasional bath will do the same.

Trimming nails, cleaning ears, and brushing teeth should also be part of every dog's grooming routine, regardless of breed.

But ultimately, as companion dogs, Rhodesian Ridgebacks love anything that involves spending time with their people.

The Rhodesian Ridgeback can be strong-willed, independent, and even territorial. So, early socialization and training are essential.

This breed responds best to positive reinforcement techniques. Keep in mind that—even with the proper training—this breed possesses a powerful hunting instinct. So, you should always keep your pup on a leash or in a fenced-in area when they are outdoors. Otherwise, they may chase after other animals.

Knowing if your Rhodesian Ridgeback is a carrier or at-risk for these conditions can help you and your veterinarian plan for your pup’s lifelong care. With Wisdom Panel™ Premium, you can get results for over 200 genetic health tests.