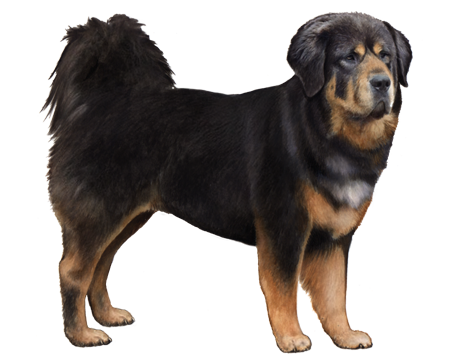 Due to their sheer size, it should come as no surprise that the Tibetian Mastiff was bred to guard properties. Though they remain protective, these dogs are actually gentle giants—mellow, loving, and devoted to their families.

The Tibetan Mastiff is an ancient breed mentioned in writings dating back to 1100 B.C. As its name suggests, the breed hails from Tibet—where it was called Do-Khyi, or "tied dog." This was a reference to the common practice of tying guard dogs to the gates during the day before letting them loose to roam (and protect) the villages at night.

Throughout history, other mastiff breeds traveled alongside the Persians, Greeks, and Romans—as well as Atilla the Hun and Genghis Khan. But Tibetan Mastiffs remained in the Himalayan Mountains, where they guarded tents and protected their owners from wolves, snow leopards, and other predators. As a result of this isolation, the Tibetan Mastiff was a rare breed. And it wasn't included in a book of pedigrees until 1873, despite evidence of its existence centuries earlier.

Tibet began exporting the breed in the 1870s, but it didn't arrive in the United States until the late 1900s.

Tibetan Mastiffs are massive, athletic dogs with a solemn yet kind appearance.

Tibetan Mastiffs have a double coat. The dense, soft undercoat becomes sparse in warmer months. And the long, thick outer coat is straight—never curly or wavy—and feels hard, not silky. These dogs have more abundant hair on their neck and shoulders, giving them the appearance of a mane. Dense, heavily feathered hair covers their tails and haunches. Males have more abundant coats than females.

The Tibetan Mastiff's coat may be several colors, including black, brown, and blue-gray. Tan markings—which range from light silver to mahogany—can appear around the eyes, muzzle, throat, lower-front forelegs, rear legs from hocks to toes, and underside of the tail. On gold dogs, sabling in a saddle-marked pattern is also acceptable by show standards. White markings on the chest and feet are also common.

Tibetan Mastiffs have broad heads with substantial back skulls, deep-set, almond-shaped eyes, and full, square muzzles. Their tails are well-feathered and curl over their backs. This surprisingly agile breed also has "cat feet" that are large, strong, and might have feathering between the toes.

The same qualities that made the Tibetan Mastiff an excellent guard dog in ancient times remain hallmarks of their temperament today. They tend to be reserved, protective of their families, and aloof with strangers. The breed can also be independent, strong-willed, and territorial. The Tibetan Mastiff's tendency to bark—especially if left outdoors overnight—makes it a better fit for rural life, where it won't annoy close neighbors.

Though Tibetan Mastiffs are devoted to their owners, they aren't overly affectionate. They may also be possessive of food or toys. Proper introductions to children, unfamiliar guests, and other animals are essential.

Tibetan Mastiffs do not have big appetites for such large dogs. In fact, some eat as little as two cups of food per day. And it's not uncommon for them to skip meals altogether. When females are in season, intact males may go up to a week without eating, losing as much as 15% of their body weight in the process.

When choosing a dog food, seek out a high-quality product that is appropriate for your pup's life stage (e.g., puppy, adult, senior). Also, consider opting for a diet specially formulated for large-breed dogs.

During seasonal shedding periods when they blow their coats, Tibetan Mastiffs require almost daily grooming with a de-shedding tool to remove the undercoat. But the rest of the year, a weekly brushing to remove dirt, debris, and tangles is sufficient. The breed standard does not allow the clipping or trimming of the coat.

Trimming nails and brushing teeth should also be part of your Tibetan Mastiff's grooming routine.

Tibetan Mastiffs require moderate exercise. Though typically uninterested in organized activities, such as fetch or flyball, this breed enjoys patrolling its territory. A large, fenced yard is the ideal place for a Tibetan Mastiff to roam.

Not known for their endurance, Tibetan Mastiffs prefer a short, brisk walk to a long, slow stroll. And they tend to be most active in cooler weather.

As Tibetan Mastiff owners may attest, this breed might just be too smart. These dogs learn fast but bore just as quickly. And they're prone to disobey commands in favor of their own instincts.

Since they aren't food-motivated and don't care much for praise or affection, Tibetan Mastiffs often don't respond to positive reinforcement. And even well-trained Tibetan Mastiffs may lack reliable recall. So, you should never let the breed off-leash in unsecured areas.

Tibetan Mastiffs might not excel at following commands. But at least they're clean dogs, making them easy to housebreak!