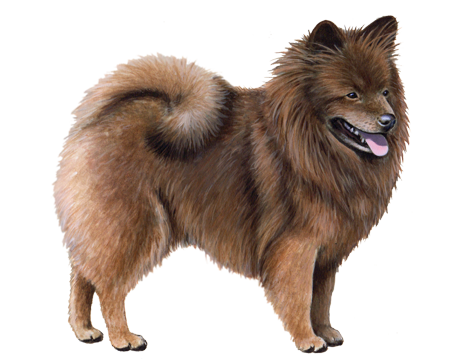 German Spitz are the ultimate "faithful companions." They are attentive, affectionate, and devoted to their people. Lapdog, sidekick, or adventure buddy—these pups are up for it all!

Spitz breeds may have descended from Stone Age Peat dogs, making them among the world's oldest domestic breeds. The first reference to the German Spitz dates back to 1450 when the breed was called a valiant defender of the home and fields.

German Spitz earned their names from their ancestors in the Northern German plain. Other members of the Spitz family include the Pomeranian/Toy Spitz (the smallest of the family) and Keeshond/Wolfspitz (the largest). The German Spitz sits in the middle and comes in three sizes: Gross (giant), Mittel (standard), and Klein (toy).

These dogs were once popular among peasant families. Traders and fishermen used them as watchdogs, relying on their high-pitched barks to alert them to trouble. The breed later captured the attention of upper-class families in England, including royal families. Both Queen Charlotte and Queen Victoria were devoted fans of the breed.

The number of German Spitz declined after World War I. In the 1970s, devotees of the breed imported Keeshonds and bred them to larger Pomeranians. The resulting mid-sized dogs were German Spitz, and the breed's numbers increased.

Despite efforts to restore the population, the German Spitz is still rare.

German Spitz stand out for their beautiful coats, mane-like collars of fur, and bushy tails. They are alert dogs with a characteristically cheeky appearance.

The German Spitz is a double-coated breed. Its short, thick undercoat has a texture similar to a cotton-wool blend. The long, straight outercoat is firm and stands off of their bodies. The hair on their heads, ears, front sides of their legs, and paws is short and has a velvet-like texture.

Their coats come in five primary colors: white, black, brown, orange, and grey-shaded. Other less common colors include cream, cream-sable, orange-sable, black, and tan. Particolored or white bodies with uniform color patches in one of the primary colors are also possible.

These little dogs have small, round, pure black noses, black lips, and almond-shaped eyes. Their small ears have triangular points that are set high and close to each other. Brown Spitz have brown noses, lips, and eyelids.

German Spitz have medium-length tails that are set high and roll forward over their backs. Similar to the long hair on their bodies, their tales are very bushy.

The German Spitz is an attentive, intelligent, and upbeat breed that makes an excellent companion. These adorable little bundles of energy have a spring in their steps and the stamina to keep up with their people—until it's time to curl up for a nap.

Ideal family dogs, German Spitz develop strong attachments to their people, including small children. Dogs, on the other hand, may be a different story. This breed might object to having another dog in the house.

German Spitz eagerly accept attention from their families. Though they can be standoffish toward strangers, they're more likely to be vocal than display fear or aggression. Their tendency to bark at the unfamiliar earned German Spitz the nickname "dung-hill barkers." Though their vocal natures might not make them the best breed for apartment living, they make excellent watchdogs.

The German Spitz is a lively breed that thrives on attention and affection. Left alone for too long, these dogs can become bored, destructive, or overly vocal.

German Spitz require a high-quality food that's appropriate for their life stage (e.g., puppy, adult, senior). Consider a diet specially formulated for small breeds. All dogs run the risk of obesity if they consume too many calories. Portion out their food in a measuring cup and limit treats to no more than 10% of their daily calories to keep them from becoming overweight.

Anyone who enjoys brushing dogs (and vacuuming) will love the German Spitz. Their coats require a lot of grooming to keep them looking their best. Some believe their heavy grooming needs are part of the reason the breed's numbers have declined. Expect to brush their double coats several times per week. During the spring and fall, when they shed more heavily, daily brushing is required.

Regular grooming will minimize shedding and prevent painful mats from forming in their long hair. German Spitz should never have their coats clipped. Their hair provides natural insulation, keeping them warm in the winter and cool in the summer.

Daily walks or games of fetch and hide-and-seek will help meet this moderately active breed's exercise needs. Limit their off-leash play to fenced areas—German Spitz are curious and may wander off. Regular exercise can keep these pups from getting bored and destructive.

Training is essential for German Spitz. These dogs are smart and eager to please. Regular obedience training helps them learn commands and establish good habits while providing much-needed physical and mental stimulation. Training can also help get their barking under control.

Knowing if your German Spitz is a carrier or at-risk for these conditions can help you and your veterinarian plan for your pup’s lifelong care. With Wisdom Panel™ Premium, you can get results for over 200 genetic health tests.