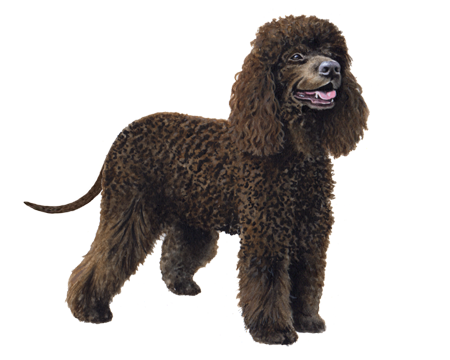 The Irish Water Spaniel is an intelligent, playful, and eager-to-please breed. With their poofy topknots and boisterous personalities, Irish Water Spaniels are often considered the clowns of the spaniel family. But these humorous dogs are just as skilled at retrieving game as they are making their humans smile.

The version of the Irish Water Spaniel we know today originated in Ireland in the 1830s. But many experts believe the breed has ancient roots. In fact, it may be the oldest (and largest) of all spaniel breeds.

The breed we know today began with a dog born in Dublin in 1834 named "Boatswain." Though the exact origin of the Irish Water Spaniel is unknown, the breed may share a common lineage with the Poodle, Portuguese Water Dog, and Barbet.

Irish Water Spaniels gained popularity in Britain for their ability to retrieve game from icy waters. They're ideally suited for this job thanks to their two-layered, water-repellent coat. Plus, this breed is an especially good swimmer because it has webbed feet and a hairless tail that acts like a rudder.

Irish Water Spaniels are sturdy, well-balanced gundogs easily identified by the poof of curls atop their heads and their smooth "rat" tails.

The Irish Water Spaniel has a distinctive topknot of long, loose curls and a body covered with dense, tighter curls. The coat comes in a rich liver with a purplish tinge. This is known as puce liver—a distinctive color not seen in any other dog breed.

The Irish Water Spaniel's expression is alert, intelligent, and quizzical. The breed's small, almond-shaped eyes are a warm dark brown or amber hue. Its long, lobular ears are covered with loose curls of hair.

Most memorable is the Irish Water Spaniel's tail. Thick at the root, the first 2-3 inches are covered with short curls, which stop abruptly. From there, the tail is covered with smooth hair and tapers to a fine point.

The Irish Water Spaniels are confident, cheerful dogs with an endearing sense of humor. They're very affectionate toward their families—including kids. However, they are typically suspicious of strangers and don't always get along with other dogs or pets.

Irish Water Spaniels need a high-quality diet formulated for their life stage (e.g., puppy, adult, senior) and activity level. To prevent your pup from becoming overweight, keep a close eye on their food portions. And be sure to take treats into account when tracking their daily calorie intake. As a guideline, treats should make up no more than 10% of a dog's calories.

Because their coats are hair and not fur, Irish Water Spaniels are an excellent breed for people with allergies. Minimal shedding means they only need to be brushed once every week or two. And because of its texture, the Irish Water Spaniel's hair is less likely to embed itself in carpets or upholstery. However, this breed does need regular haircuts, ideally from professional groomers.

Your Irish Water Spaniel's nails will wear down somewhat during daily activity. But they still need regular inspections for splits or cracks and should be trimmed to keep them at an ideal length.

Irish Water Spaniels are high-energy dogs that need a lot of daily exercise. Long walks, hikes, and backyard play sessions are great ways for them to burn energy and spend time with their family members.

Because the breed originated to retrieve and swim, fetching tennis balls from the water will make Irish Water Spaniels very happy pups.