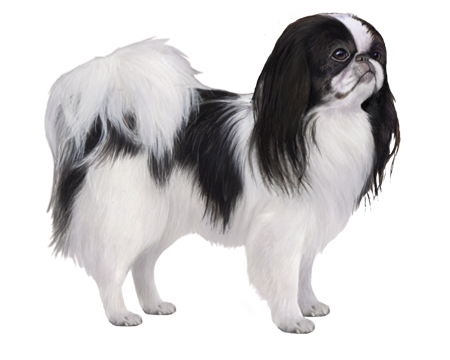 Japanese Chins have a lot in common with cats. They're reserved and fastidious, groom themselves often, and move through life with a slightly superior attitude. Chins will even claim a favorite spot in the house to lie back and take in the world.

The origin of the Japanese Chin is a mystery. Despite its name, the breed appears to have originated in China—or perhaps Korea. These small dogs served as companions, were bartered for goods, or given as gifts to traveling dignitaries. Eventually, they became a favorite breed of Imperial families, and they learned to appreciate the finer things in life.

Regardless of where the Chin got its start, credit for developing the breed belongs to Japanese nobles. However, due to the isolationist policies that lasted until the mid-1800s, the Chin remained unknown outside of Japan. Once the borders reopened, the breed found homes around the world. Chins were unfazed in their new surroundings.

The Japanese Chin Club of America noted, "The Japanese Chin lorded over his environment and cared not whether it was a 150-room palace or a three-room cottage: his concern was only that he was considered to be the most important object within and life catered to his every whim."

Japanese Chins have retained their aristocratic attitudes and continue accepting the love and devotion of all of those who cross their paths.

Japanese Chins are small dogs with delicate features and curious expressions. The breed is known for being light on its feet and having an "aristocratic bearing" that makes it both stylish and lively.

Abundant, straight, silky hair is one of the hallmarks of the breed. Japanese Chins have hair that stands out from their bodies, especially around their necks, shoulders, and chest areas, forming a ruff. Fine, silky hair covers their tails and forms a plume.

Japanese Chins can be black and white, red and white, or black and white with tan points. Their red coloring includes all shades of red, orange, lemon, and sable. The tan points include tan or red spots over each eye, inside the ears, on both cheeks and, if the dog has any black, around the hind end.

Though Japanese Chins are small in stature, their builds are solid, compact, and refined. They have large, wide-set eyes that are round and dark in color. Chins also have large, broad heads, small V-shaped ears, and short, broad muzzles.

The Japanese Chin's coat is its most distinctive trait. They have long fur covering their rumps, profuse feathering on the backs of their legs, and heavily feathered ears.

Japanese Chins are good-natured, sensitive, and intelligent dogs. Their desire to give and receive affection—often on their terms—makes them ideal companions. Though Chins bond with their owners, the breed can be reserved with strangers and in new situations. They often prefer spending time at home, taking in the world through a coveted perch on the sofa.

These lap dogs are quiet, well-mannered, and meticulous, making them ideal for apartment life. Though Japanese Chins prefer indoor life, they still need regular exercise. And they can be stubborn, so training is a must.

Feed Japanese Chins a high-quality dog food that's appropriate for their age and breed size. To prevent them from becoming overweight, keep an eye on their food intake. Portion out their meals using a measuring cup to avoid over-feeding and limit treats to no more than 10% of their daily calories.

These noble dogs appreciate looking their best. Despite their long hair, Japanese Chins don't require a lot of grooming. Regular baths and weekly brushing to remove dirt and mats are enough to keep their coats in tip-top shape. But just to be sure, Chins will sometimes groom themselves, licking their paws and rubbing their faces.

Japanese Chins have fast-growing nails. Regular trims are required to keep them from cracking, splitting, or becoming painfully overgrown.

Despite their lapdog statuses, Japanese Chins still need regular physical activity to burn off energy. Brisk walks, romps at the dog park, and games of fetch are great for providing mental and physical stimulation.

These little dogs have independent streaks and might not come when called, so limit off-leash play to enclosed areas.

Training is a must. Japanese Chins were bred to be adorable and charming, not respond to commands. Their independent natures and cat-like personalities can make training a challenge. Keeping sessions short and fun—and providing plenty of praise and treats—can convince them to follow along. Since they're sensitive dogs, they respond best to positive reinforcement, not harsh commands.

Knowing if your Japanese Chin is a carrier or at-risk for these conditions can help you and your veterinarian plan for your pup’s lifelong care. With Wisdom Panel™ Premium, you can get results for over 200 genetic health tests.